Please note that these size charts are only rough guides to fits in the clothing and brands which we carry. If items are small or large fitting, it will be stated in the product description. If you have any questions or queries about sizing on specific items, feel free to drop us an E-Mail to [email protected] or call the store on 0191 5675898.

Please note: We have not individually measured each garment. The sizes below have been supplied by Belstaff. Each product page should specify the fit of the garment. If you have any individual sizing queries, contact us via Livechat or via [email protected]. 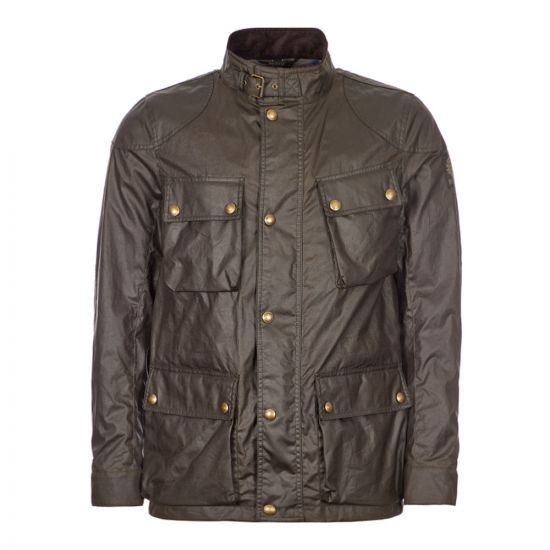 Belstaff Fieldmaster Jacket in Faded Olive. True to British heritage and taking inspiration from the brand's iconic Trialmaster jacket originally founded in 1948, the Belstaff Fieldmaster encompasses a motorcycling aesthetic merged with versatility and practicality. In fact, the birth of British motorsport in the early 1900s was the precursor of this leading outerwear brand, landmarked by the opening of Brooklands motorsport venue in Surrey, England, along with novel events such as the Isle of Man Tourist Trophy Race and the Scottish Six Day Trial, both of which have become some of the world's biggest motorcycling events.

The Belstaff Fieldmaster Jacket harnesses many of the Trailmaster's original features, namely the wax cotton construction, which not only makes for the ideal heritage look, but is also responsible for the brand's emergence as a leader in utilitarian inspired outerwear.

Belstaff founder Eli Belovitch had humble beginnings in the business of manufacturing and supplying weatherproof fabrics like wax cotton; now Belstaff’s signature fabric, in the form of capes, groundsheets, and tents to the British Army during the Great War. Aided by his son-in-law, Harry Grosberg, Eli migrated his business toward becoming the first to use wax cotton in the creation of wearable waterproof goods with the pair opening an Army, Navy, and General store in Staffordshire in 1924, hence the brand military aesthetic that has been sustained over the century to modern-day.

Innovation lies at the heart of the brand's essence, a dedication initiated by Harry in a quest for pioneering fabrics that took him across Europe and Asia in the mid-1920s. This evolutionary ethos transcends to modern adaptations of Belstaff's staple pieces, with current wax cottons now being CE certified and coming fully equipped with a waterproof membrane for added protection against the elements, reminiscent of the Belstaff Fieldmaster Jackets' original uses in enduring the weather conditions of the Scottish Six Day Trial or blazing across the natural speedway of Pendine Sands.

No matter your use for this piece, you are sure to experience the vigor of the risk-takers, adventurers, and thrill-seekers for whom the Belstaff Fieldmaster Jacket was originally crafted, making every day an adventure.

WE HOPE YOU ARE DELIGHTED WITH YOUR ORDER. HOWEVER, IF FOR SOME REASON YOU ARE NOT 100% SATISFIED, WE WILL HAPPILY ISSUE A REFUND ASSUMING THAT THE ITEM(S) ARE RECEIVED BY APHRODITE WITHIN 14 DAYS OF RECEIPT AND ARE IN-LINE WITH OUR RETURN POLICY.

IF YOU MISS THE 14 DAYS FOR A REFUND, PURCHASES MADE FROM 1ST NOVEMBER - 25TH DECEMBER CAN BE RETURNED UP UNTIL 10TH JANUARY FOR AN EXCHANGE OR ONLINE CREDIT NOTE ONLY.

We hope you are delighted with your purchase however, if for any reason you are not completely satisifed we will happily issue a refund for item(s) that are returned within 14 days of receipt providing they are in-line with our standard returns policy (see below.) All returned items should be un-worn, un-washed and in a re-salable condition with all tags attached. Some items may be non-returnable for health and hygiene reasons, please view our returns page for more information or for any enquiries regarding returns please contact our customer service department via email [email protected] or phone 0191 5675898.

Aphrodite1994 aims to provide you with the very best customer service available.

Returns are simple and easy. If you are not completely happy with your purchase, you can return within 14 days of receipt.