The heritage brand we all know and love

The Barbour brand personifies Britishness, providing jackets for the stereotypical British man for over 100 years where it has continually presented as a forerunner for men’s fashion, most notable in its extensive collection of functional, stylish and durable jackets.

History of the Barbour Brand

It all began in 1894, where John Barbour opened their first store in the Market Place in South Shields, selling functional clothing to local labourers who needed something that carried longevity. It wasn’t long before Barbour became a success and by 1917 Barbour was receiving orders through its catalogue from places like Chile, South Africa and Hong Kong. Continued success was furthered in 1934, where Duncan Barbour, based on his personal interest in the sport, introduced a motorcycling range that was worn by almost every British International team. This adoption continued all the way through to 1957, where 97% of the competitors who took part in the Scottish 6 Day Motorcycling Event wore one of Barbour’s International jackets. The Barbour brand continued its exponential expansion and in 1974 it received its first Royal Warrant from the Duke of Edinburgh to provide waterproof and protective clothing. These days Barbour is traditionally worn amongst many farmers, but it didn’t officially move into this area until 1980, where the Barbour Bedale, a thornproof riding jacket, was introduced. Shortly after, Barbour received a second warrant by order of her Majesty the Queen, making it an extremely prominent and distinctive force within the fashion world. In 1988 Barbour created its subsidiary in Germany, setting the foundations to make the brand an international name, which it can now boast, with a presence in over 40 countries worldwide.

With so many different trends and options readily available in today’s market, refreshingly, the Barbour brand has managed to sustain its same heritage look for decades while ensuring lines feel both classic and yet wholly contemporary. The brand still operates from its original factory in Simonside, South Shields, making them fond neighbours of Aphrodite as we’re situated a few miles down the road in Sunderland. Over the years, Barbour has extended its collections to cover all walks of life, providing fashionable necessities for the likes of riders, hunters and farmers through their masterful and time-honoured construction and fabrication. Below are the different collections that Barbour currently offer:

Heritage – Focusing on individual, authentic clothing that maintains an essence of style throughout.

Lifestyle – A much more contemporary line, drawing on staple silhouettes to add to any modern man’s wardrobe. True essentials such as polos, shirts and jackets.

Barbour International – A range that focuses on Barbour’s iconic biking range, using iconic designs through season to season to provide functional fashion for the man with an edge.

Barbour Beacon – Launched most recently in the autumn of ’18, Barbour Beacon takes its name from the lighthouse situated closeby to the brand’s South Shields factory and even forms its logo around the iconic landmark. Slightly more street-worthy than its sister lines, this imprint presents a youthful take on the company’s heritage.

Something that instantly stands out about the Barbour brand is its originality. Since its inception, the brand has maintained a specific charisma and style that is consistently seen throughout every collection. Barbour jackets conform to Barbour’s idea that style can be mixed with a substance to create a fashionable yet practical jacket, which is exactly what Barbour outerwear is. Countless awards that range from shooting communities to fashion heads show that Barbour manages to seamlessly merge purpose and presentation together, something that even the Royal Family has recognised, with an ongoing partnership that provides the likes of Her Majesty the Queen with Barbour jackets for rainier days. In the past decade, Barbour has gone through somewhat of a resurgence in popular culture. This shift in popularity can be attributed initially to various celebrities wearing the brand to festivals, such as Glastonbury. Photographs of these stars would appear in magazines and television around the world; boosting the profile of the brand globally and as a result, bolstering its sale. This then created a ripple effect within the fashion market and more of the rich and famous were seen sporting the Heritage brand.  The demand on the street for Barbour was insatiable and retailers couldn’t get their hands on enough of the brand with their waxed and quilted jackets seemingly worn on every street you walked down.  Over the past couple of years, the demand for the quilt has subsided slightly and Barbour seems to have shifted their focus towards producing different outerwear styles whilst maintaining that youthful but classic appearance. 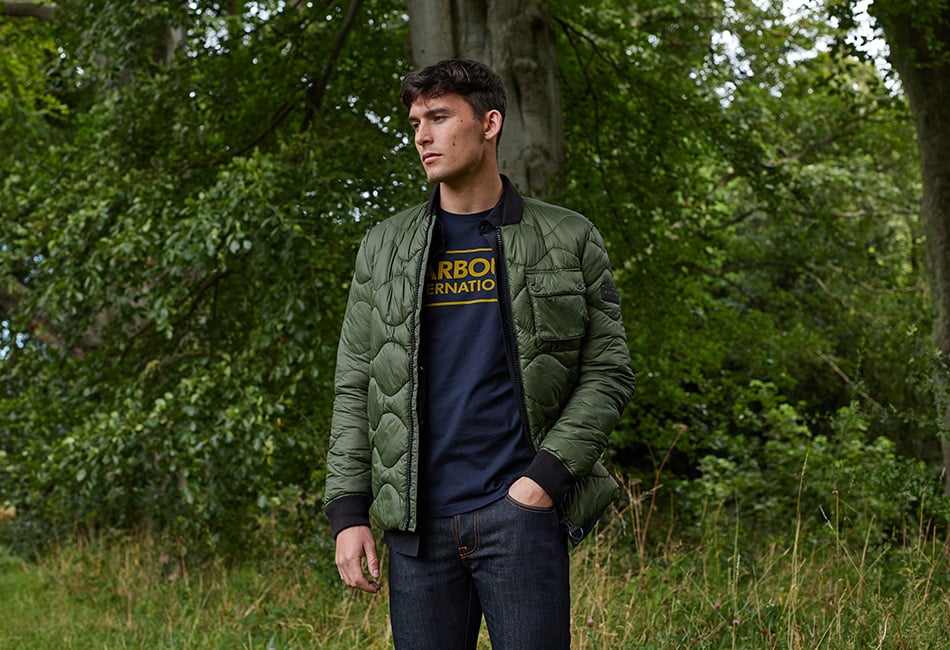 Barbour’s rich heritage was exemplified perfectly in the James Bond film, “Skyfall”, where 007 (played by Daniel Craig) was provided with a special edition jacket that Barbour created, based on one of its classic designs.  That particular Sporting Jacket was fetching bids of over £600 before it was even released to the public.  A range of other male and female celebrities have been spotted wearing Barbour including the likes of Holly Willoughby, Alexa Chung, Steve Jones and Rupert Grint along with various members of the British Royal Family.