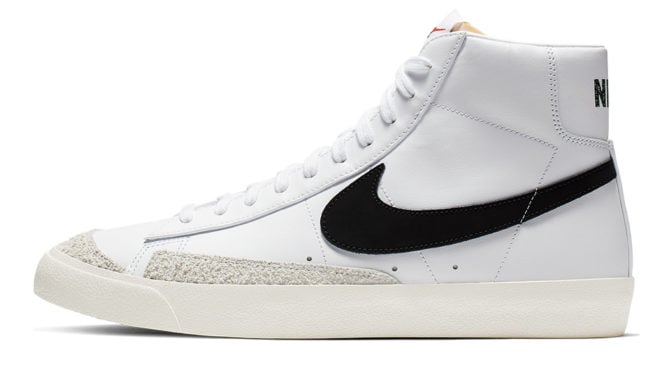 Although we’ve very recently clicked toward a new decade, it seems that for Nike, the clock only seems to be rolling backwards. For 2020, the sporting stalwart is digging through its extensive archive to re-deliver the iconic look of ‘70s B-Ball, encapsulated perfectly this season by the upcoming release of the all-new Nike Blazer Mid ‘77 Vintage, set for release soon at Aphrodite.

It’s certainly no secret that the Beaverton-hailing brand has a penchant for shooting sartorial hoops; for generations now, the Swoosh bearing label has visually represented pioneering players across the globe, while its iconic footwear designs have scaled professional leagues from the top to the bottom. The latest Nike Blazer Mid ‘77 Vintage distinctively harks back to times gone by, referencing an early age in the game, whereby the likes of Moses Malone and Julius Erving would be dominating play with their trailblazing performances. Clad in blinding whites and punchy blacks, this retro silhouette sets just high of the ankle, providing the wearer superlative support during a plethora of activity. Composition wise, leather and synthetic uppers supply these sneakers with a textural, tonal finish while supplying a supple build for all-day comfort. As well as vintage treated midsoles, these sneakers also boast exposed foam at the inner tongue, a signature component of the Nike Blazer and a feature that catapults the throwback theme to new heights.

Underfoot, Nike utilises an autoclave construction which firmly bolsters the shoe’s outsole to the midsole, giving the design its streamlined, ergonomically considered shape, while its non-marking, solid rubber surface is articulated with a herringbone pattern that promises to provide stable traction. Keep your eyes peeled in the coming days for the release of the Nike Blazer Mid ‘77 Vintage, we’re confident the sportswear giant is about to score a huge slam-dunk with these retro-rendered kicks.

Style Guide : How To Wear Denim